The most spectacular saunas

Featuring exceptional contexts and high impact architectures, here are some of the finest saunas in the world on a journey from America to Northern Europe.

More and more, saunas are getting out of the spa resort context and inserted into unprecedented surroundings that give something extra to the wellness experience. Immersed in greenery or embedded in remote corners to discover, the world’s most spectacular saunas are often characterized by remarkable architectural designs by contemporary designers and artists working with innovative materials and technologies, transforming mere wellness treatment into a true multisensory experience.

From North America to Northern Europe, where the sauna is considered an integral part of traditional local culture, here are four of the world’s most beautiful saunas. 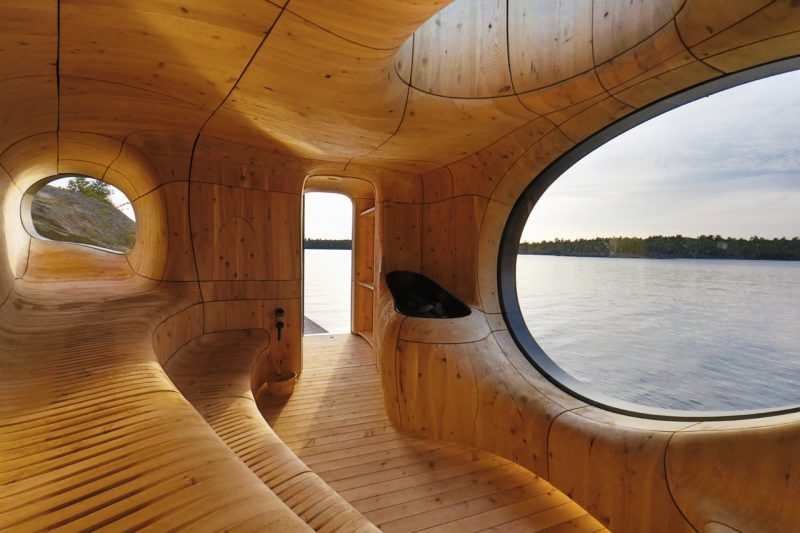 The first leg on the ideal trip to discover the world’s most spectacular saunas starts in North America, more precisely Canada and Georgian Bay, which runs along the coast of Lake Huron in Ontario.

The Canadian Grotto Sauna was born from a project by architects of the Partisans group, who wanted to create a sauna that would fit perfectly into the surrounding natural environment, made up of prehistoric rock formations, imitating its features and shapes.

The Grotto Sauna was inaugurated in 2014: the exterior presents itself with a hard-wood linear form, a single and solid wooden block, but its interior perfectly imitates the sinuous curves of a natural cave, but carved in wood. In particular, cedar was chosen for the interior: native to Canada, this material is highly resistant in humid environments, as well as having an aroma and a colour that lend themselves to being used in a area dedicated to relaxation.

Another sauna that takes advantage of the beauty of the landscape of North America’s lakes is the WA Sauna, a Floating Sauna that moves between Lake Washington and Lake Union, navigating around Seattle. The idea comes from the American firm goCstudio, whose architects were inspired by the religious Scandinavian practice of this rite of well-being and relaxation, which this particular concept perfectly integrates with the surrounding landscape to become a true rite of well-being for the soul.

The structure assumes the appearance of an actual floating shelter, consisting of a cabin and a pressed wooden platform with enough space for a small deck to lay out on and relax after the sauna experience. 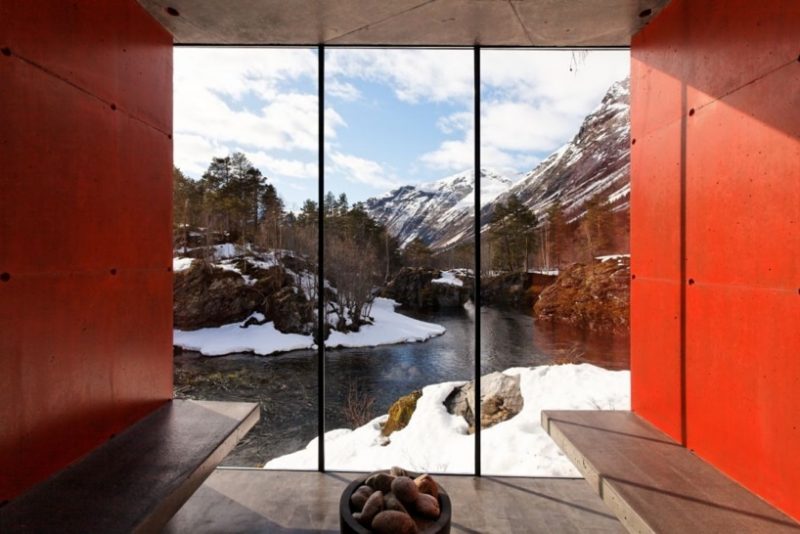 Flying overseas we reach Northern Europe, the land where the sauna is a tradition that is truly followed religiously. One of the can’t miss European saunas is the Underground Sauna at the Juvet Landscape Hotel near the village of Åndalsnes in northwestern Norway.

Designed by architects Jensen and Skodvin, the sauna has been open since 2009 for hotel guests: a real gem, nestled in native vegetation and enclosed among the geographic features that characterize this area, within walking distance of the National Tourist Route.

The sauna was carved out of the rock, sinking into the subsoil, but the large central glass window allows you to enjoy a breathtaking view while going through wellness treatment. A structure that integrates with the surrounding landscape and naturally with the imposing hotel, consisting of nine wooden buildings with huge windows that allow to guests to immerse themselves in the surrounding nature. 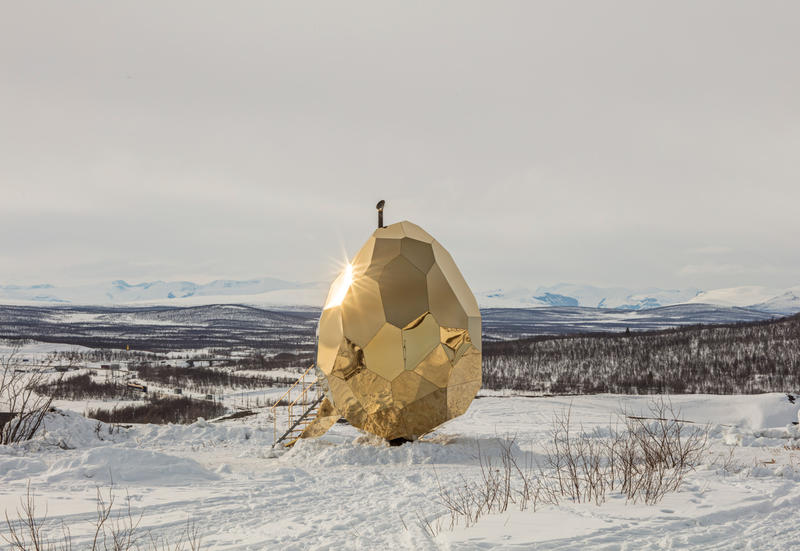 The last leg of our tour of the world’s most beautiful saunas is the Solar Egg Sauna in Kiruna, Sweden, a kind of sauna shelter designed by artists Bigert & Bergström. The peculiar thing about this sauna is its completely unprecedented form, which calls to mind – as the name suggests – an egg. Solar refers to the fact that its outer surface is extremely shiny: this is due to the fact that it is covered with mirrors made of stainless steel and golden titanium.

A sauna that in this case has become a real work of contemporary and conceptual art: its surface provides a fragmented reflection of the surrounding landscape, an effect desired by the artists who created it, to symbolize the profound transformation – not always positive – of an uncontaminated territory at the hands of man. This is what has happened in Kiruna, a town whose landscape has been devastated due to the exhaustive mineral extractions, especially of iron, from its subsoil. In this context, Solar Egg Sauna is a place where wellness has become a true haven, which at the same time wants to become the symbol of the rebirth of a territory that is overly exploited for its resources.